The rule of thirds in photography is a time-honored technique that yields well-composed shots. Shutterbugs looking to get back to basics can benefit from revisiting this theory, which focuses on finding the perfect visual balance between a photo subject and its surroundings.

What is the Rule of Thirds?

The rule of thirds may be more aptly named the rule of ninths since it essentially divides an image into nine parts. This popular photo technique requires the photographer to draw imaginary lines on the camera viewfinder to create a tic-tac-toe-like grid that is divided into thirds both horizontally and vertically. The intersections of the imaginary lines are where the subject should be placed in order to create a balanced photograph.

Another way to interpret the rule of thirds is to imagine the nine-part grid creating four major intersections. The intersecting lines act as markers. These markers are where you should place points of interest. For example, instead of placing your photo subject smack in the center of your camera's viewfinder, consider situating it at one of the intersecting points. By doing this, you create an additional point of interest that helps to produce a more visually appealing shot.

The rule of thirds has been around for centuries. In fact, it predates photography altogether. The rule was first established in the art world and applied by famous artists, such as Rembrandt and Picasso. In regard to photography, John Thomas Smith is credited with applying the rule to picture-taking in his 1797 book, Remarks on Rural Scenery. In his book, Smith expands a method originally discussed by Sir Joshua Reynolds that focuses on the idea of balancing shadows (dark) and light in a painting. Smith went on to coin the term "rule of thirds" that has become a basic principle in the field of photography.

Tips for Applying the Rule of Thirds

Successfully applying the rule of thirds comes with a bit of practice and patience. The key to learning when and how to apply the rule boils down to identifying what the points of interest are in each shot and whether the photo looks better when the subjects are placed off center. Once you are able to determine the focal points of a shot, you can apply the rule to a variety of photo genres. For example:

Action shots are another area that can benefit from the rule of thirds. For example, this photo of a young boy running on grass successfully incorporates the rule. 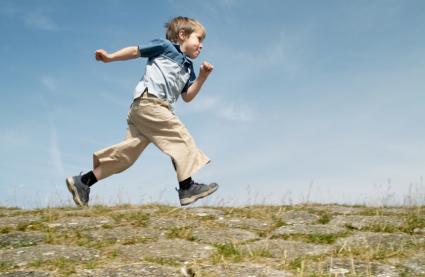 The next photo neglects to incorporate the rule of thirds and is a sharp contrast to the one that does. 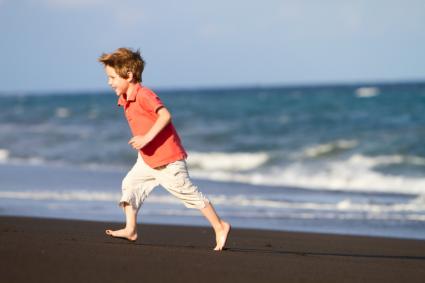 This shot leaves little to no space in front of the subject. The boy in this shot looks as though he is going to run out of the picture. If the photographer had placed the child in the lower right position, then the photo would have illustrated a natural flow of movement. With action shots, it is important to leave more space in front of a moving subject than behind. Once you get used to applying this rule, you won't have to think twice about the direction of the subject's actions.

It's important not to become obsessed with this particular photography rule. Remember, it is a guide for creating better compositions in your photos, not a definitive mandate that forces you to place focal points on imaginary intersecting lines. If you forget to apply the rule during a particular shoot, then keep it in mind when you are modifying with photo editing software. Most editing programs allow you to crop and reframe shots so you can still have photos that reflect the rule of thirds.