Mosadek Miah photography is so awe-inspiring that it is often compared to masterpieces taken by iconic landscape photographers such as Ansel Adams and Edward Weston.

Mosadek Miah is an award-winning fine art landscape photographer from Australia. He travels the world capturing the magnificence of Mother Nature in a unique and evocative photographic style. His work has been featured in a number of world-class galleries, including ones located in Sydney's historic The Rocks precinct.

Miah's extensive collection of fine art landscape photos mimics human vision with unparalleled accuracy. His photos of the world's most famous natural wonders are stunning and illustrate his shooting philosophy of "trying to share unrepeatable moments in time, light and place." Miah says his goal in documenting nature in its truest form is to instill a deeper sensory experience to viewers and momentarily take them where he has been.

Miah's travels have been well documented and the resulting images often evoke powerful emotions. Subsequently, the adventurous shutterbug has been hailed as a "visionary" in the field of landscape photography. Some of Miah's most critically acclaimed shots have come from: 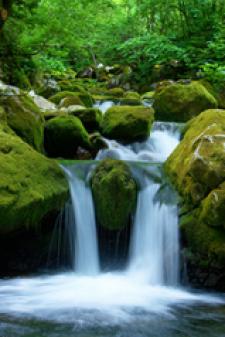 Mosadek Miah has helped revolutionized fine art landscape photography. Landscape photography is a genre, which is intended to show different natural spaces within the world. The popular form of photography typically shows little or no human activity; rather it strives to attain pure, unsullied landscapes that remain untouched by man.

Landscape photography has become extremely popular in the 21st century, as environmental stewardship has taken root as a social institution. Like many famous landscape photographers who came before him, Miah excels at capturing the beauty of unspoiled places, which are rapidly dwindling in our current times.

Miah is a self-proclaimed purist when it comes to capturing photographs. While others have embraced digital technology, Miah still shoots exclusively with panoramic and traditional large-format film cameras. According to Miah, the practicality of using film cameras in the wilderness has yet to be matched by any digital camera technology. In fact, Miah happily brags that the only battery-powered device he takes into the field is his hand-held light meter, which he uses to calculate the correct exposure for every frame. Other than that simple battery-operated photo tool, Miah relies solely on the raw simplicity of film cameras. The self-taught photographer is not shy when it comes to crediting his success to his digital-free equipment. Miah points out that since he doesn't use electrical components, there is little that can fail mechanically when he is shooting in the great outdoors. What's more, composition, focus and exposure settings are all executed manually, which means Miah can capture accurate exposures without worrying about camera malfunctions. To further enhance the beauty of his shots, Miah experiments with unique visual effects from lenses, exposure settings, polarizing filters, temperature and contrast balancing filters.

Interestingly, while Miah may shun digital cameras, he whole-heatedly embraces digital technology when it comes to printing his visual masterpieces. Miah's primary goal in doing so is to produce the best color landscape photographs possible. Miah's professionally processed transparencies are digitally scanned to provide superior resolution, clarity, color and contrast. The digital images are then exposed onto quality archival paper using the very latest generation of large-format photographic printers. According to Miah, this digital process of producing photographic prints from transparencies puts traditional darkroom processes to shame in all respects. The end result is a clean, sharp and detailed image.

Where to Purchase Samples of Mosadek Miah Photography

Limited edition Mosadek Miah photographs may be purchased from individual galleries and from his website. According to Miah, as a particular photograph sells through its edition it will increase in value and price until the edition is sold out, which means that your photo investment will appreciate in value over time.

If you plan to purchase an original Mosadek Miah photograph, you should know that each image is strictly limited to a small edition of 50, 100 or 300 prints to be sold worldwide. Each photograph is also personally signed and numbered by Mosadek Miah and comes complete with a certificate of authenticity.