Although early variations of dark boxes with pinholes have been around for more than a thousand years, the first camera that could actually reproduce an image with light was invented less than 200 years ago. Since that time, there have been many firsts, including the first camera to produce detailed images, the first to be used by consumers, and even the first to produce a digital file. It's fascinating to learn about the development of this amazing artistic tool.

The camera obscura, a device written about by Aristotle more than 2,300 years ago and possibly used by great artists like Vermeer, is the ancestor to the photographic camera; however, according to the Oxford English Dictionary, a camera needs to be able to produce an image on film, paper, or another medium. The major drawback of the camera obscura was that it produced only light; it was impossible to preserve the image. That all changed in 1826 or 1827 when Joseph Nicéphore Niépce modified the camera obscura to be able to produce a photographic plate.

To create the first photograph with his camera, Niépce experimented with a variety of different plates, including paper, varnish-coated vellum, and metal. He coated the plates with a type of asphalt and watched how they were affected by the sunlight, calling his experiments "heliography" or sun writing. He tried many times to create an image in the camera obscura, but he found that the image faded quickly. Eventually, he settled on a pewter plate, slid it into the back of the camera obscura, and produced an image that still survives today.

Although Niépce's camera produced a permanent image, that image was very indistinct. The shot is a view from a window, but without the knowledge of what he or she was looking at, the modern viewer would have trouble making sense of the scene. Still, it was a very important development that made Niépce the inventor of the first camera to produce an actual photo. 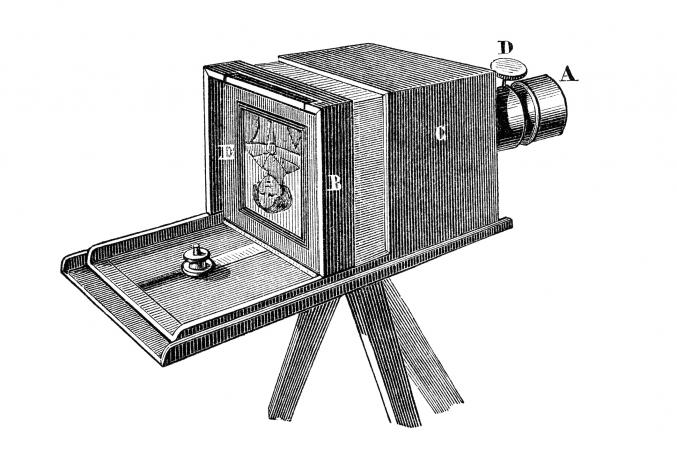 Unfortunately, Niépce's camera was not a commercial success. He refused to disclose the process he was using to produce images, and the images lacked clarity and detail. He went into partnership with a man named Louis-Jacques-Mandé Daguerre in 1829, and the two men worked together to refine the process and make it commercially successful. Unfortunately, Niépce died in 1833 and did not get to see the huge commercial success Daguerre realized by modifying his original design.

Using the same basic process of a box that let in light through a small hole, Daguerre created a camera that could produce incredibly detailed images on a polished sheet of silver-plated copper that has been sensitized using vaporized iodine. He placed the plate in the back of the camera and then exposed it to light for a few minutes. Afterward, he developed the image using mercury fumes and "fixed" it or made it permanent with sodium thiosulphate.

Daguerre's camera and process were instantly commercially successful. Because they could produce an image so quickly and in such detail, they were adopted around the world. Daguerre became wealthy and was world famous even after his death in 1851. Many daguerreotypes still survive today in family archives, museums, and libraries. 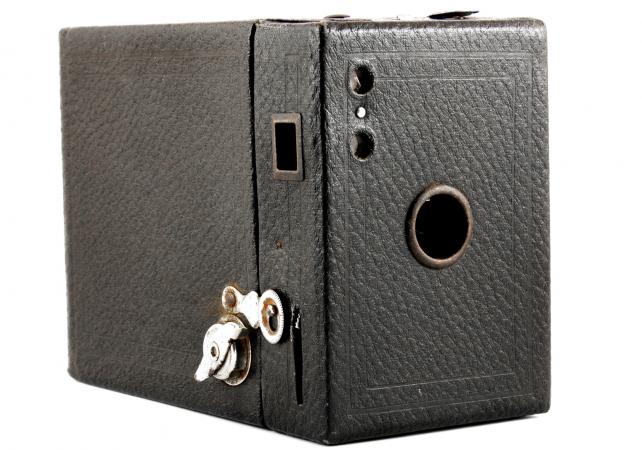 Over the years, various other plate methods became popular for producing photos with cameras. There were tintypes and glass plates, and eventually, photographers began to print on paper. However, photography was still only for professionals or very dedicated amateur experimenters. It wasn't until 1889 when George Eastman invented the Kodak No. 1 camera that regular people could begin using a camera to capture their important moments.

The Kodak No. 1 was a large brown box with a winding key at the top of it and a lens in the front. Consumers purchased it for about $25 (more than $620 in today's money) pre-loaded with 100 shots worth of film. The consumer would use it to take 100 photos and then send it back to Kodak to be developed and reloaded, a process that cost about $10. The resulting images were round.

A glance at any family photo album can tell you how this invention changed photography. It took the camera out of the photo studio and into the home, resulting in images that captured real life. As years went by, the consumer camera continued to be redesigned and refined, but it was the Kodak No. 1 that made casual photography possible. 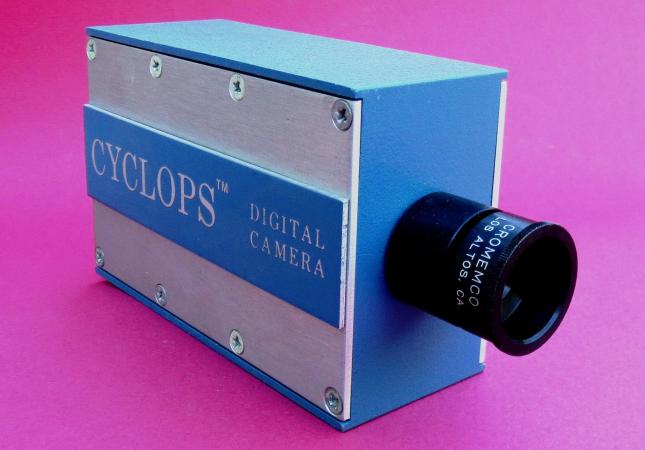 Camera technology changed over the years as metal and glass plates gave way to film. Still, there was always a direct relationship between the light and the physical object it acted on. Then, in 1975, an Eastman Kodak engineer named Steve Sasson invented the first digital camera.

Sasson assembled his prototype digital camera from some Motorola parts, a couple of sensors, 16 nickel cadmium batteries, a digital tape recorder, and the lens of a Kodak movie camera. The eight-pound behemoth captured black and white images at 0.01 mega-pixels, each taking 23 seconds to create. To view them, Sasson and other Kodak engineers had to invent a special screen.

Although Kodak chose not to develop Sasson's prototype commercially , the digital camera was the way of the future. According to the Camera and Imaging Products Association, 24,190 digital still cameras were shipped to consumers in 2016. This includes point and shoot cameras, as well as DSLRs, but it doesn't include the many digital cell phone cameras in use by consumers.

From a simple box that created a blurry, faint image on a pewter plate to a digital camera the size of a toaster, there have been many important "firsts" when it comes to camera invention. Each development changed the world of photography forever, and it's interesting to keep them in mind when you take your next shot.